Were you one of the collectors who were waiting for the heat on NECA's Django line to finally die down so you could get one a normal price? Well, it look like that won't be happening, thanks to the outcry of people who were offended by the figures.

I do see both sides of the argument on this one, but I do think that the people who demanded that this line be killed were not in touch with the tone of the film and, ergo, the figures.

But, what can anyone say? I understand that many characters that were represented in this figure line were part of a very sad and embarrassing (and far, far too long)  part of this nation's history.

Personally, I'm extremely liberal, so I'm not a fan of censorship, but at the same time, I do think that certain lines need to be held and not crossed. I wasn't personally offended, but then again, I don't have the history that many Americans do with this particular material.

I truly hope that this does not effect the upcoming Django figures from Enterbay. It's a completely different market, but since it was the license holder (the Weinstein Company) that put the kibosh on the NECA figures, it certainly could do the same on the Enterbay ones as well, just to avoid the bad press.

Here is The Weinstein Co's statement about the NECA Django figures:

"In light of the reaction to the 'Django Unchained' action figures, we are removing them from distribution. We have tremendous respect for the audience and it was never our intent to offend anyone. They were meant to be collectibles for people 17 years and older, which is the audience for the film."
UPDATE: 12/21/2012

These figures are actually shipping to stores now, and are already available at NECA's e-bay store!

Yeah... I'm still not sold on these things. An 8" scale is just hard to do in that old Mego style without the stuff looking kind of silly. The clothing looks too big and bulky. That's what happens at this scale. It happens in the 1/6 (12") scale too, but manufactures use a different kind of material that replicates how the real stuff would look and fit if you shrunk it down to 12" tall. When you use actual cotton to represent a cotton shirt on a 8" figure, it just looks out of scale and silly. I hope that isn't the case with NECA's figures, but from these pics, it kinda looking that way. And the likenesses don't look to great, either.

I'm gonna reserve final judgement on these until I either some really good "in-hand" pics or I see them in person myself. 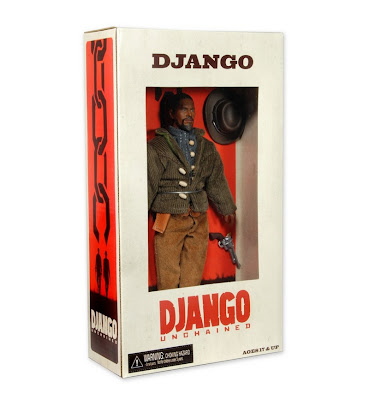 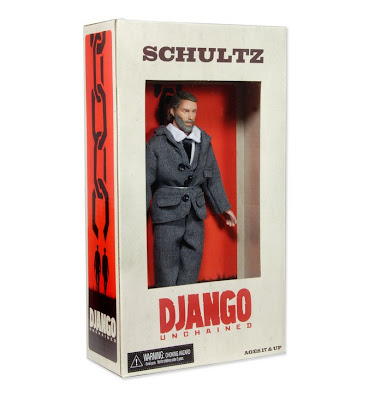 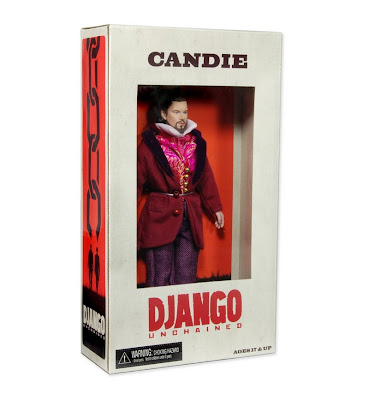 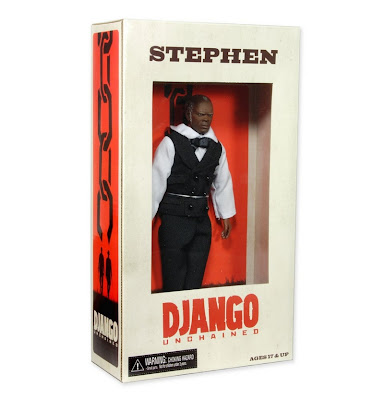 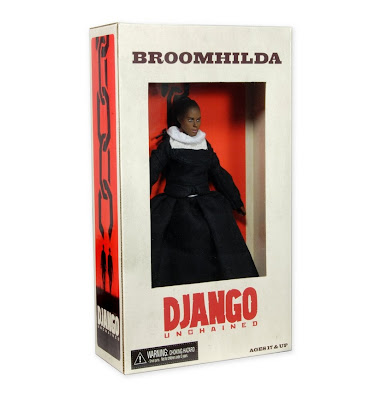 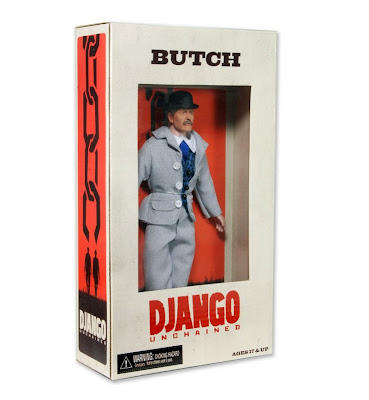 So we've known for some time that NECA would be doing Mego-Styled (my words, not theirs) figures for Quintin Tarantino's Django Unchained film.

I'm very interested to see what NECA can do in a 8" figure format using real cloth clothing. Most companies who have done this have stuck to the "retro" style because it's not easy to do a realistic looking figure in an 8" scale with real clothing-- unlike the 12" format, which can also have its pitfalls.

I'd love to see this experiment work out for NECA just to see what else we may get in the future, but I'm not sure if this particular property is going to lend itself to success in any format.

I'm a huge fan of all of Tarantino's films, but Django doesn't have the over-the-top action of Kill Bill or the cult status of Pulp Fiction, so I'm not sure what the big selling point to the masses will actually be.

I guess if you're a Tarantino fan or of you enjoyed  the movie, you might want a figure or two, but you need more buyers than that! Personally, I fear that these figures will sit on the shelves for a very long time... But, then again, I never thought the Gremlins or ET lines would have been as successful for NECA as they have been, so what the hell do I know?

NECA is projecting these figures to hit stores in March, so we should be seeing some prototypes soon. Hopefully before Toy Fair. 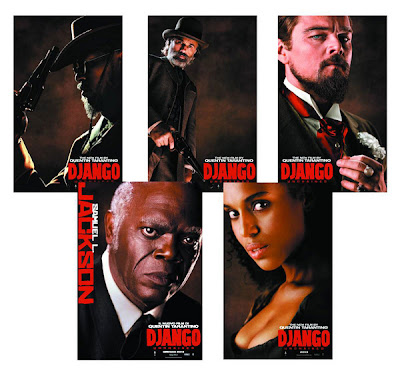 Posted by John Stinsman at 2:53 PM