With the success of Play Imaginative's first "Super Alloy" release, Batman styled after comic super-star artist Jim Lee's drawings (see pic below), they have now decided to move forward with more DC figures as well as figures from the upcoming Iron Man 3. 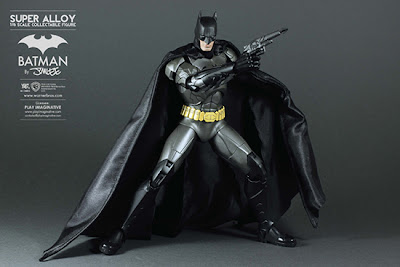 For those who aren't familiar with this line, they are fully-posable figures with a very large die-cast content. That of course translates into a rather hefty price tag.

The idea of actual die-cast Iron Man figures is something that certainly interest me, but I'm very curious to see the actual figure and pricing info before I get too excited.

Coming this year, they will be launching a line of 1/6 DC figures based on DC's "New 52" relaunch.

Here's the line-up so far:


Moving on to Play Imaginative's Iron Man 3 license, it seems that there will be no 1/6 figures  (presumably because it would infringe on Hot Toys' agreement with Marvel to produce Iron Man 3 figures in that scale), and instead will be in the huge 1/4 scale and smaller 1/12 (6") scale.

There will be at least twelve figures produced, six in each scale (the same figures for both.)

Announced so far for both scales are:


There are no official pics yet, but I assume that we will start to see some images and more info very soon.
Posted by John Stinsman at 6:17 PM