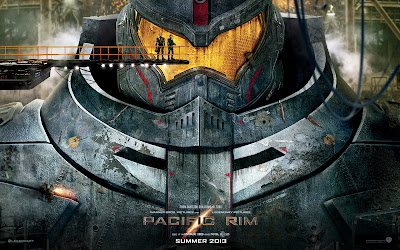 Pacific Rim director Guillermo del Toro has confirmed that NECA will be doing some form of action figures (and other collectibles) for his upcoming summer action flick.

Personally, this movie is a total geek-gasm for me! Giant Robots fighting Giant Monsters?!? How did Guillermo del Toro reach into my dreams and pull out the most awesome thing I've ever dreamed of seeing, like, EVER!?

I know it isn't going to happen, but imagine NECA doing huge figures from this movie! Like Shogun Warriors size!! Yeah, I know... This isn't the 70's anymore and stuff like that now costs like $100+ easy, but man, that would be awesome.

I do hope that they go for something larger than a simple 7" figure line, though. I want robots with a LOT of features. Opening hatches, moving pistons, arms transforming into rocket launchers! The works!

Sideshow is also doing some statures and stuff, but this is a toy and action figure blog, so I'll save that info for someone else's stature forums.

Posted by John Stinsman at 7:48 PM